Three bodies of the Miners that were blasted at Karebe Gold Mine site on Monday have been retrieved by the police officers in partnership with the public while the other  six miners that were injured admitted in different Hospitals in Kisumu and Nandi Counties.

The explosive attacks on the Mine were as a result of the illegal Miners who are rivals with the Firm.

Confirming the incident, Tindiret police Boss Mr Abdullahi Jire while addressing the media, said the bodies were retrieved on Tuesday from the rubbles and taken to Nandi hills County Hospital morgue lauding the Members of the public for their cooperation and offering a helping hand in the rescue operations at the Mine.

‘I want to thank the public and the community at large for assisting the police in rescue operations at the mine and retrieving of the bodies” Jire said.

He cited that the six casualties injured during the incident are admitted in various Hospitals in Nandi and Kisumu with fractures, burns and bruises as a result of the blast from the illegal Miners and are responding well to the treatment.

The Company (Karebe Gold mine) management on Tuesday issued a comprehensive report on the deadly attack condemning the incident which was fueled by the illegal miners who blasted the underground wall which was erected to curb the mine against flooding and invasion from the illegal miners.

The management revealed that for a very long time have been asking the security organs to protect the Company from any illegal forces but their efforts has proved them futile since nothing has been done to date as the Company has been facing a lot of misfortunes.

The OCPD cited that the problem facing the mining firm of Karebe is as a result of a prominent family owning a temporary mining permit/license and have enlisted/contracted a Chinese company to conduct mining thus there is need to find a lasting solution to the problem urging the government to chip in.

Sigh of relief for landslide victims in west pokot after three years of waiting.

Lusaka commits to run a government that is inclusive of PWDs 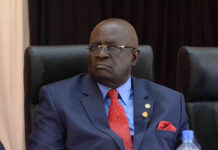